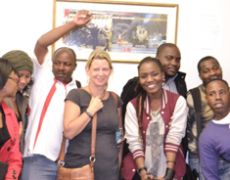 Three members of LCSV, including Director Sarah Bracking, Research Associate Aurora Fredriksen and LCSV PhD candidate Fortunate Machingura, took part in the winter school of the Centre for Civil Society (CCS) in the University of KwaZulu-Natal’s School of Built Environment and Development Studies and the Open Society Initiative for Southern Africa (OSISA), 15-27 July 2013.

The theme of the summer school this year was Rethinking Sustainability, Development and Economic Justice. The course brought together leading development activists with the relevant scholarly interests and/or strategic responsibilities from across the region for a unique experience. The course looked at the international context, African development policies, the case for economic policy reform both at the macroeconomic and sector levels and specific advocacy cases – as well as locally applied work. The course entailed a range of modules including political economy, political ecology, gender justice, popular mobilisation, social media and community organising.

Professor Sarah Bracking led a module on economic justice that considered the structural causes of economic injustice in Africa on several critical fronts and assesses the opportunities in which progress could be made given current global neoliberal economic governance. The module explored key concepts such as human rights and economic justice; employment, minimum wages, the informal sector and livelihoods, opportunities for people’s struggles and the militarisation of the state in response to this.

Fortunate and Aurora later presented on the problems of assigning value to human life and social development. A highlight of this session was an interactive ‘marketplace’ activity in which students were encouraged to move around the room either in groups or individually, and write down their ideas for how value should be accounted for at the local, national, and regional level. The activity and the session as a whole generated a lot of great discussions on value and valuation practices as they relate to sustainability, development and economic justice.